Raptors of the Columbia Gorge,
Inspiring Conservation through Raptor Education

The Columbia Gorge Discovery Center’s Raptor Program is the only place in the Gorge where you can meet and learn about live birds of prey. All 6 of our raptors are non-releasable due to injuries they sustained in the wild. We have given them a forever home here with us where they have become educational ambassadors for their species and help us teach the public about raptors during educational presentations.

Our raptor presentations are an inspiring way to learn about raptors, including falcons, hawks, owls, and eagles. You’ll get an up-close experience with a raptor, presented by our raptor program’s staff. Adults and children of all ages will enjoy learning about the unique attributes of each fascinating raptor species. Presentations address the challenges of declining habitat, the hazards of toxic chemicals, and the role humans have played in both endangering and protecting these majestic ambassadors from the wild. 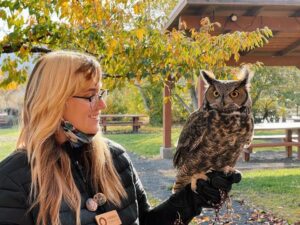 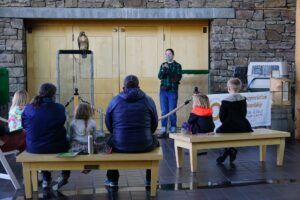 Jean Cypher, D.V.M. of the Rowena Wildlife Clinic, called in Spring 2007 to see if the Discovery Center would be interested in having a bald eagle to display. With the assistance of the Discovery Center administrator, Dr. Cypher, Chris Tolotti of Wildlife Rescue of the Gorge, U.S. Fish and Wildlife Migratory Bird Division, and Oregon Fish and Wildlife Department, the idea for a full-scale education and exhibit project evolved.

The program meets several needs. It affords the clinic an avenue for educating the public about native raptors and their habitats, provides a place for non-releasable injured birds that must otherwise be euthanized, and offers the Discovery Center a program that meets its mission to inspire appreciation and stewardship of the Gorge. The bald eagles are strictly exhibition birds, allowing the public a relatively close view of a very large raptor. Its 24’x48’ enclosure allows room for exercise, although their permanent wing injuries prevent them from flying.

In addition to the eagle exhibit, several education birds are on site include a great horned owl, an American kestrel, a northern pygmy owl, and a red-tailed hawk. All of these birds are the property of the federal government held under permit with Oregon Department of Fish and Wildlife and United States Fish and Wildlife Service. 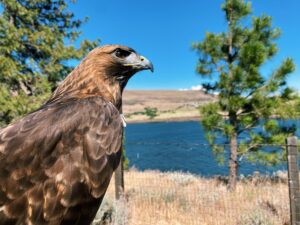 Killer is our 14 year old lady full of sass and curiosity. She fell from her nest when she was 6 weeks old and injured her right wrist. Although she was rescued and taken to Rowena Wildlife Clinic, her wing never completely healed which prevents her from being able to fully extend it and fly. She loves hanging out in the sun, taking walks around the museum, shredding quail wings, and painting. 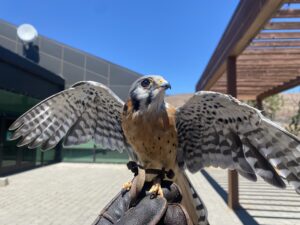 Hank is our 14 year old gentleman who is a real hit with the ladies. He was illegally stolen from his nest when he was 2 days old and raised by humans. Unfortunately, he imprinted on humans during that time and will always look to humans for companionship and food. In the spring time if you see him outside, he might let out a few flirty calls your way. He enjoys mouse tidbits, taking baths, and going on walks around the museum when it’s sunny outside. Click here to buy Hank a mouse! 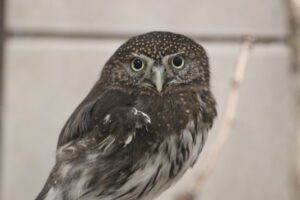 Sibley may be small, but he has a huge personality full of spunk. He is at least 5 years old, but we will never know his true age since he was found as an adult. He was found on ground with a right wing injury and had to undergo a partial wingtip amputation. Sibley gets around very well and loves hanging out in his nest box, perching in his pine tree branches, and vocalizing to his handlers.

Junior is our 14 year old male who can be heard hooting at night in the winter time. He was found on the ground as a youngster and taken to a rehabilitation facility where it was determined he was non-releasable due to minimal vision in both eyes. After a few months with us, he had regained most of his vision back but was too habituated to humans. He enjoys hooting to Josephine and his handlers, shredding his paper enrichment, and eating his dinner. 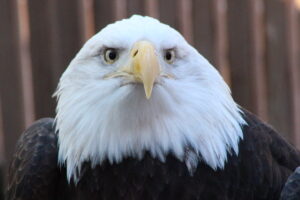 Liberty is our 16 year old chatty lady who makes sure everyone can hear her. She was found with an open fracture on her left wing which required surgery. After a few unsuccessful surgery attempts to mend her wing, they had to partially amputate her left wingtip. This prevents her from flying, but just like Ferguson, she has some impressive jumps! Despite her disability, she gets around very well and loves splashing in her pond after a big fish dinner. 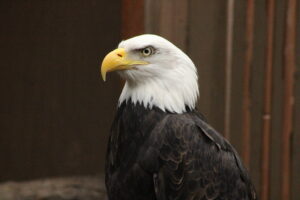 Ferguson was found as an adult, so we know he is at least 20 years old. Two fisherman saved him after he crashed into a tree and fell into the Columbia River. Due to a right wing injury that became infected, he had a partial wingtip amputation to prevent the spread of infection. His disability prevents him from flying, but he still has some impressive jumps! He absolutely loves shredding rabbit fluff, taking a splash in his pond, and moving sticks around his enclosure.

WAYS TO CONTRIBUTE TO OUR RAPTOR PROGRAM

The Discovery Center’s Raptor Project receives funds solely from donations, program fees, and grant support, all of which go directly to the care and maintenance of the raptors.

In order to expand the public’s appreciation and knowledge of raptors and to help fund the stewardship of the birds, you can symbolically adopt a Discovery Center raptor. A raptor adoption makes a great gift for the animal lover in your life! Click here to adopt one!

You can make a tax-deductible donation online by clicking here. During your visit to the museum, you can donate directly to our Raptor Program’s donation box as well.

You can purchase an item from our Amazon Wishlist that can be sent directly to the Discovery Center. Our wishlist includes supplies for enclosure maintenance, food prep, enrichment for our raptors, and more! Check out our list here.