A unique, one-of-a-kind, exhibit draws on 16 years researching the cargo and launch of the Lewis and Clark expedition. The Corps of Discovery carried 30 tons of supplies and equipment across the continent. This exhibit examines why and how Lewis acquired and packed so much for the journey and how difficult it was to transport the cumbersome cargo.

Ken Karsmizki’s archaeological search for Lewis and Clark began in Montana 1986 and his methodology led to the first Lewis and Clark site conclusively identified based on physical evidence, at Lower Portage Camp near Great Falls, Montana.

Karsmizki’s proven methodology is a lengthy painstaking process of map and journal analysis, geophysical survey and interpretation, test excavation and if warranted extensive excavation, and laboratory analysis. This analysis includes dendrochronology, radiocarbon dating, archaeomagnetic dating, lead isotope analysis, and faunal analysis at numerous laboratories in the United States and Canada. NASA and the United States Air Force have helped in this search, and Karsmizki’s Lewis and Clark research is the subject of a Discovery Channel documentary entitled “The Search for Lewis and Clark” released June 2002. 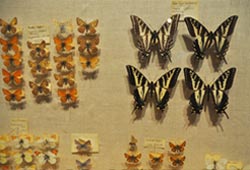 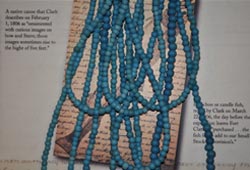 Experience the expedition by stepping inside a canvas tent that had to shelter up to six men from the elements. Feel the weight that crew members routinely carried. Aim a flintlock rifle and smell the medical herbs used along the trail.