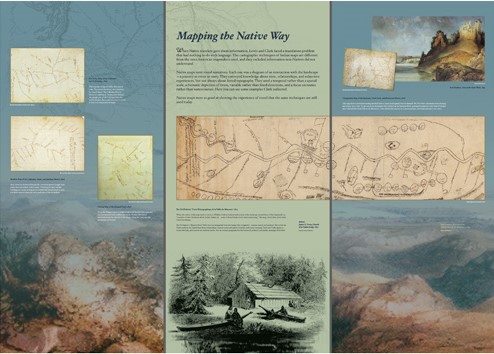 This exhibition uses large-scale reproductions of historic maps, photos, and explanatory text to show how America looked before the journey of Lewis and Clark, and what it looked like after. In 1804–06, Meriwether Lewis and William Clark led an expedition from the Mississippi to the Pacific. Their primary goal: to reveal the geography of the West. Using cutting-edge scientific techniques and methods as old as humanity, they created a new portrait of America so persuasive we still recognize it today. This exhibition shows how they did it. The exhibition is free with museum admission.

The maps of Lewis and Clark
In 1803, Native people knew the West, but Americans could only speculate.

The Race to Map the West
British cartographers had drawn ahead, and America needed to catch up. Thomas Jefferson had an answer.

How Did They Find Their Way?
Lewis and Clark started by collecting information from people who had been there before.

Revising the Continent
Their maps changed the future of America